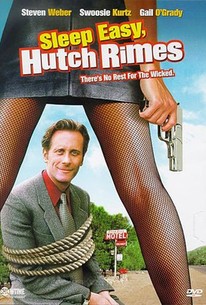 Michael O'Connell ran several video stores in Denver, CO, before taking up screenwriting, and the endless stream of direct-to-video thrillers that littered his shelves inspired his script for this satiric black comedy. Hutch Rimes (Steven Weber) runs an insurance company, and even though he's married, he's developed a bad habit of getting involved with his secretaries. Hutch's latest Girl Friday, Holly (Nina Siemaszko), is also married, but often finds herself being used as a punching bag by her loutish husband Cotton (Gregg Henry). Holly persuades Hutch to help her kill Cotton, but things don't go as planned, and Cotton pulls a gun on Holly; Hutch manages to escape just before Cotton kills his wife. Ten years later, Cotton is released from prison just as Hutch begins receiving a series of anonymous letters from someone who wants to kill him. But since Hutch is having an affair with his stenographer Olivia (Gail O'Grady), he's not sure if the angry party is Cotton or Olivia's husband, Dewey (Stephen Tobolowsky). Things get even stickier for Hutch when Olivia decides she wants out of her relationship with Dewey -- and asks Hutch to help murder her husband. Sleep Easy, Hutch Rimes also features Swoosie Kurtz as Binny, one of Hutch's few female employees that he never gets around to sleeping with.

There are no critic reviews yet for Sleep Easy, Hutch Rimes. Keep checking Rotten Tomatoes for updates!

There are no featured audience reviews for Sleep Easy, Hutch Rimes at this time.