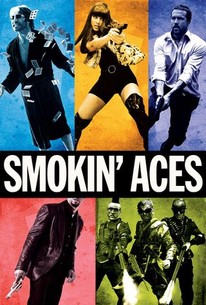 A violent mess of a movie, Smokin' Aces has some Quentin Tarantino's style but not much of his wit or humor.

When a shifty magician turns state's evidence against a Las Vegas underworld heavy, the high price placed on his head sparks a fevered race to rub the snitch out and collect a tidy paycheck in Narc director Joe Carnahan's dark action comedy. Buddy "Aces" Israel (Jeremy Piven) is a small-time scammer who has somehow managed to get the goods on big-time mobster Primo Sparazza. Upon discovering that Buddy is about to deliver the evidence needed to get him thrown in jail for life, Primo takes out a sizable contract on Buddy that entices every two-bit thug, grizzled bounty hunter, deadly vixen, skilled assassin, and ladder-climbing Mafioso within a hundred-mile radius into taking a shot at the prize. Now holed up in his luxurious Lake Tahoe hideout with only two FBI agents (Ryan Reynolds and Ray Liotta) standing between him from a virtual army of money-hungry rogues, Buddy is about to find out just how far this motley crew of killers is willing to go in order to take him out and hit the jackpot. Ben Affleck, Jason Bateman, Andy Garcia, Alicia Keys, and Martin Henderson co-star in a bullet-strewn, ensemble crime comedy that never stops to reload. ~ Jason Buchanan, Rovi

Wayne Newton
as Himself

Vladimir Kulich
as The Swede