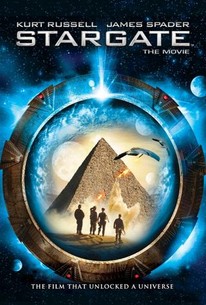 Stargate has splashy visuals and James Spader to recommend it, but corny characterization and a clunky script makes this a portal to ho-hum.

1:40
Stargate: Official Clip - Give My Regards to King Tut

This lucrative, elephantine-budgeted sci-fi opus paved the way for director Roland Emmerich's mega-hit Independence Day (1996). The story commences in Giza, Egypt, circa 1928, where an archaeological expedition unearths an ancient ring with cryptic hieroglyphs. The film then moves to the present day, where Egyptologist Daniel Jackson (James Spader) is busily trying to convince a group of skeptics that the pyramids were not built by man, but by an extraterrestrial force. After the lecture, a military man approaches him and offers him a job translating the said ring; its inscriptions actually constitute a map to a massive stargate (or interstellar portal). The army sends over resident crackpot colonel Jack O'Neill (Kurt Russell) to travel through the stargate and see what's on the other side; Jackson accompanies him, and the two men turn up in a desert planet on the other side of the universe, with three moons in its sky. The world in question is ruled by Ra (Jaye Davidson), a hermaphroditic Egyptian sun god, who oppresses hordes of slave workers. Jackson and O'Neill then join forces to help the said workers revolt against their oppressor. ~ Paul Brenner, Rovi