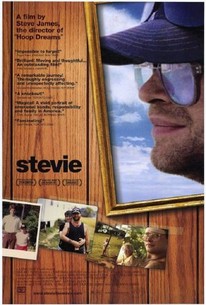 Documentarian Steve James, who directed "Hoop Dreams" in 1994, embarked on a new mission the following year. In 1995, he returned to rural Southern Illinois to reconnect with Stevie Fielding, a troubled young male to whom he had served as mentor and Big Brother, ten years earlier. James intended to capture the happy reunion on camera. What he discovers, instead, is a grown-up, Stevie, who is utterly impoverished and living in a trailer park. The filmmaker embarks on a quest to uncover what exactly happened to Stevie over the past ten years; as well, James tries to understand the forces that ultimately shaped Stevie's life and turned it into the dour existence that it has become. Part way through the filming, Stevie is arrested and charged with a serious crime that rips his family apart. That which was intended to be a modest profile turns into an intimate four-and-a-half-year chronicle of Stevie, his broken family, the criminal justice system, and the filmmaker himself--as they all struggle with accepting the crime that Stevie has committed, while trying to understand the person who has become.

It Follows, A Series of Unfortunate Events, and More Available on Netflix, Amazon Prime, and FandangoNOW
View All