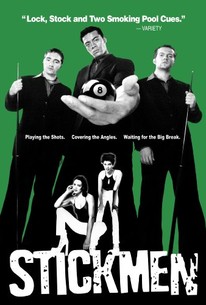 Three small-time gamblers discover their stakes have been raised to a career high in this comedy-drama. Jack (Robbie Magasiva), Wayne (Scott Wills), and Thomas (Paolo Rotondo) compose a trio of hotshot billiards players who devote their spare time to hustling games at their favorite watering hole in New Zealand. When the boys learn that Daddy (Enrico Mammarella), a fearsome local crime czar, is organizing a high-stakes pool tournament, they decide to get in on the action, but when they learn that Dave (John Leigh), the owner of their favorite pub and hustling spot, is deep in dept to the mob, they figure that wining the tourney may be their only hope for keeping the bar open (and Dave alive). As Jack, Wayne, and Thomas prepare to square off against the sharpest Kiwi pool sharks alive, they find themselves attracting the attention of Karen (Simone Kessell) and Sara (Anne Nordhaus), a pair of beautiful women who seem to know their way around a billiard table and are more than casually interested in the boys. But what the guys don't know is that Karen and Sara are world-class pool hustlers who've been hired by Daddy's crew to distract them and throw them off their game. Stickmen was the first feature film from director Hamish Rothwell, who previously was a top director of television commercials and music videos. ~ Mark Deming, Rovi

There are no critic reviews yet for Stickmen. Keep checking Rotten Tomatoes for updates!

There are no featured audience reviews for Stickmen at this time.