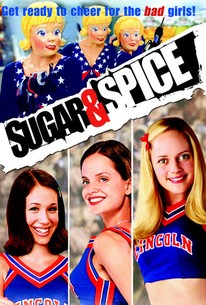 Though this cheerleader comedy has an intriguing premise, it's too empty-headed and saddled with too many lame jokes to live up to it. Also, some critics say the movie is irresponsible in its depiction of teens and guns.

The directorial debut of Australian filmmaker Francine McDougall, this teen comedy stars Marley Shelton as Diane, captain of the Lincoln High School A-squad cheerleaders, the most popular girls in their school. They include born-again Christian Hannah (Rachel Blanchard), the rebellious Kansas (Mena Suvari), late-night talk show fan Cleo (Melissa George), and brainy geek Lucy (Sarah Marsh). When Diane learns that she's pregnant, she and her stud quarterback boyfriend Jack (James Marsden) get hitched and quickly learn that marriage with children is an expensive proposition. With some advice from Kansas' convict mom (Sean Young), the squad embarks on a plan to rob a bank, but their peppy enthusiasm and patented cheerleading moves may give them away to the authorities.

Jamison Hasse
as Football Player No. 2

Isabell Monk
as Inmate No. 1

Miriam Must
as Inmate No. 2

Jennifer Snell
as Inmate No. 3

Cassie Fox
as Average Girl No. 2

Jerry Springer
as Himself
View All