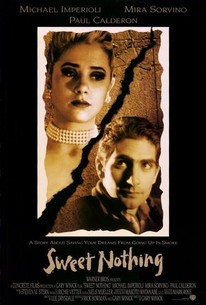 The psychology of drug addiction is examined in this thought-provoking drama. The trouble begins when Raymond introduces his friend Angel, a worker at a brokerage, to crack cocaine. The powerful drug radically changes Angel's life and soon he has quit his job to become a full-time dealer to insure a constant supply. His wife Monika initially objects, but then she finds herself liking their higher standard of living. But things begin to go wrong when Angel becomes increasingly paranoid and abusive. Meanwhile, Raymond finds himself on a grand power trip because he is a major dealer; he and Angel have a fight and suddenly Angel finds himself without a source. In desperation he does anything he can, no matter how degrading or dangerous, to find enough crack to sell. He is unmindful of his disintegrating family. Interestingly, the film's story is based on a series that had been found in a Bronx tenement. The filmmakers found the author, also named Angel, and have since sponsored his rehabilitation efforts; apparently they were successful and Angel has been clean for two years.

Critic Reviews for Sweet Nothing

Audience Reviews for Sweet Nothing

There are no featured audience reviews for Sweet Nothing at this time.