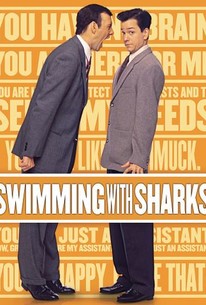 Originally screened at Telluride as The Buddy Factor, Swimming With Sharks is an uneven but engrossing picture, and a possible warning to anyone with plans to break into the motion-picture business. When Guy (Frank Whaley), a recent film-school graduate with big ideas, takes a job as assistant to major studio executive Buddy Ackerman (Kevin Spacey), he believes his ship has finally come in; little does he know it's a slave ship, for his boss is indeed worse than a slave driver. Buddy delights in abusing his boy-toy (exemplified by the scene in which he forbids Guy to go to the bathroom as he pours water back and forth from a glass to a pitcher). Meanwhile, Guy struggles to push his idea for a script and feels he's finally made it when Buddy congratulates him on a job well done. However, much to his chagrin, his conniving boss actually takes sole credit for the project, pushing the young assistant to wit's end -- he breaks into Buddy's Beverly Hills showplace and takes him hostage, then proceeds to torture him in a number of demeaning and horrifying ways. The whole film stands as a sort of parable about the value system in Hollywood and the cost of reaching the top; it doesn't play like real life, but it's not supposed to. The real reason to watch the film, however, is Spacey's performance. He manages at once to be terrifying, hateful, and hilarious, and he makes Buddy Ackerman a character the audience won't soon forget. ~ Jeremy Beday, Rovi

Patrick Fischler
as Moe
View All

News & Interviews for Swimming with Sharks

Critic Reviews for Swimming with Sharks

Audience Reviews for Swimming with Sharks