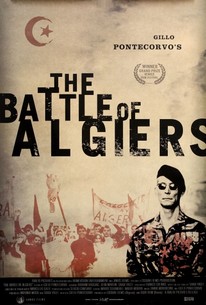 A documentary-like depiction of a nation's real-life efforts to expel a colonizing force, The Battle of Algiers puts viewers on the front lines with gripping realism.

This highly political film about the Algerian struggle for independence from France took "Best Film" honors at the 1966 Venice Film Festival. The bulk of the film is shot in flashback, presented as the memories of Ali (Brahim Haggiag), a leading member of the Algerian Front de Liberation Nationale (FLN), when finally captured by the French in 1957. Three years earlier, Ali was a petty thief who joined the secretive organization in order to help rid the Casbah of vice associated with the colonial government. The film traces the rebels' struggle and the increasingly extreme measures taken by the French government to quell what soon becomes a nationwide revolt. After the flashback, Ali and the last of the FLN leaders are killed, and the film takes on a more general focus, leading to the declaration of Algerian independence in 1962. Director Gillo Pontecorvo's careful re-creation of a complicated guerrilla struggle presents a rather partisan view of some complex social and political issues, which got the film banned in France for many years. That should not come as a surprise, for La Battaglia di Algeri was subsidized by the Algerian government and -- with the exception of Jean Martin and Tommaso Neri as French officers -- the cast was entirely Algerian as well. At least three versions exist, running 135, 125, and 120 minutes. ~ Robert Firsching, Rovi

Samia Kerbash
as One of the Girls