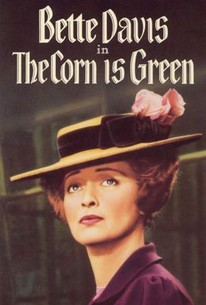 The Corn Is Green

The Corn Is Green Photos

In this 1945 filmization of Emlyn Williams' semi-autobiographical 1938 play +The Corn is Green, Bette Davis steps into the role originated on Broadway by Ethel Barrymore. Davis plays Miss Moffat, a turn-of-the-century schoolteacher in a Welsh mining town. She has opened her own school in hopes of lowering the town's illiteracy rate, thus enabling the younger residents to seek out more fulfilling lives than merely sweating away in the mines until they drop. She runs into a great deal of resistance from mine-owner Nigel Bruce, who realizes that as soon as the citizens can read and write, they'll rebel against his benevolent despotry. Even Miss Moffat concludes that her mission is hopeless until she is visited by young miner John Dall, who wants to know "what is behind all those books". Within two years, Dall has made so much progress that he has qualified for Oxford. A last-minute snag involving Dall's illegitimate child is solved when Miss Moffet herself agrees to adopt the baby so that her student can complete his education. Emlyn Williams himself came from a backward mining town, and was himself inspired to better things by a compassionate schoolteacher; the pregnancy angle was (probably) added to provide the story with a third act. The Corn is Green was remade for television in 1978, with Katharine Hepburn as Miss Moffat. Watch for one amusing gaffe in the original: despite carefully setting up the premise that the villagers are illiterate, they are shown hovering around a poster and reading it out loud in an early scene.

Nigel Bruce
as The Squire

Tony Ellis
as Will Hughes

Herbert Evans
as Miners in Bar

Billy Evans
as Miners in Bar

David Hughes
as Miners in Bar

Robert Cory
as Miners in Bar

Critic Reviews for The Corn Is Green

Audience Reviews for The Corn Is Green

The Corn Is Green Quotes