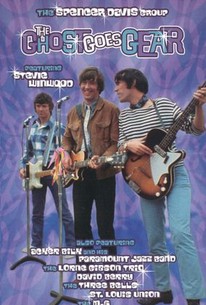 British beat outfit The Spencer Davis Group starred in this comic pop-musical in which their manager Algernon Plumley (Nicholas Parsons) is discovered to be the heir of a large estate. Unfortunately, Algernon's family is having money problems, and his new mansion is in a sorry state. The group gets the idea of fixing up the place and charging people to tour the premises, but while that's fine with Algernon, it doesn't go over so well with the ghost who haunts the old house. Playing keyboards and singing with The Spencer Davis Group was Steve Winwood, who would later form the groups Blind Faith and Traffic and go on to a successful solo career. The Ghost Goes Gear also features performances from Acker Bilk, Dave Berry, The Three Bells, and The M6. ~ Mark Deming, Rovi

Peter York
as Himself

Steve Winwood
as Himself

Muff Winwood
as Himself

Spencer Davis
as Himself

Stevie Winwood
as Himself

Acker Bilk
as Himself

Dave Berry
as Himself

Pete York
as Himself

There are no featured audience reviews for The Ghost Goes Gear at this time.