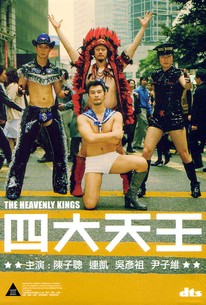 After moving from San Francisco's Bay Area to Hong Kong and launching a successful acting career in the late 1990s, first-time feature filmmaker Daniel Wu crafts a scathing satire of the exploding, multi-million dollar Hong Kong pop-music scene in this Spinal Tap-inspired expose of meticulously manufactured boy band "Alive." Despite the fact that none of them can actually sing, a group of friends from the Hong Kong entertainment industry make the decision to form a boy band that will storm the charts and win fans all across Asia. After a potentially profitable record deal goes sour and the band stealthily leaks a song to the internet, they attempt to manipulate the media by publicly claiming that the song has been illegally pirated and was never intended for distribution. As a result, the catchy pop tune becomes an instant hit and Alive is instantaneously heralded as an overnight sensation. Now, despite experiencing all of the perks that come with having a number one hit, the questionably talented members of Alive soon find that the road to success is filled with treacherous potholes that can send one careening down a self-destructive path on a moments notice.

News & Interviews for The Heavenly Kings

Critic Reviews for The Heavenly Kings

Audience Reviews for The Heavenly Kings

There are no featured audience reviews for The Heavenly Kings at this time.