The History Of Future Folk 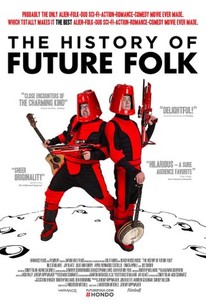 The History Of Future Folk

High on quirky smarts and low on splashy special effects, The History of Future Folk is an unusual -- and unusually fun -- slice of sci-fi.

The History Of Future Folk Photos

THE HISTORY OF FUTURE FOLK tells the hilarious (and possibly exaggerated) origin story of the real life alien bluegrass band, Future Folk, that has been charming NYC audiences with their live act for the better part of a decade. When a comet threatens to destroy their planet, the citizens of Hondo enlist their most decorated soldier, General Trius (Nils d'Aulaire), to search for a new home planet- and wipe out the current inhabitants with a flesh-eating virus. After landing somewhere near Brooklyn, General Trius wanders into a megastore to unleash the terror... when he's suddenly enchanted by a strange and mystical human invention known as "music." They don't have music on Hondo, and since it's the best thing he's ever heard, General Trius immediately abandons his mission to eradicate the human race, assumes the name Bill, starts a family, and launches a one-alien bluegrass act in a tiny bar owned by Larry (Dee Snider). Years later, his peaceful life is disrupted when the Hondonians send a bumbling assassin named Kevin (Jay Klaitz) to get the mission back on track. Although subduing Kevin is no challenge for the great General Trius, the Hondonians have no intention of calling off their plan to eliminate mankind, so Bill and Kevin must join forces to save Hondo, prevent an intergalactic takeover of Earth, and hopefully get some bigger gigs for the universe's first Hondonian bluegrass duo: Future Folk! (c) Variance

News & Interviews for The History Of Future Folk

Critics Consensus: After Earth is Lost in Space
View All

Critic Reviews for The History Of Future Folk

Audience Reviews for The History Of Future Folk

The History Of Future Folk Quotes