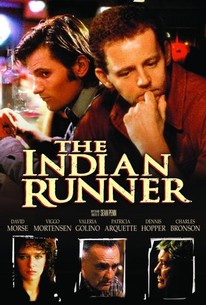 The Indian Runner, Sean Penn's debut film as director (he also wrote the script, based on the Bruce Springsteen song "Highway Patrolman") is a brooding tale of two brothers -- one peaceful and sedate, the other violent and aggressive -- whose natures, left unchecked since they were children, are set to the boiling point as they head toward middle-age. David Morse is the quiet brother, Joe Roberts, who is a deputy sheriff in a small town. His older brother Frank (Viggo Mortensen) shows up on Joe's doorsteps, after a recent run-in with the police. Frank tells Joe that he is coming back home to stay and that he has given up his criminal life. His wife Maria (Valeria Golino) is skeptical, but Joe tells her that he is prepared to help Frank get his life back together. Frank has almost convinced himself that his future holds real promise and he's ready to start a new life with his pregnant girlfriend Dorothy (Patricia Arquette). But, once again, Frank's violent temper explodes, and everyone's plans for Frank's future crumble into rubble

Kathy Jensen
as Lady at Carwash

Eddie Katz
as Guy on Commode

Jimmy Intveld
as Kid on Highway

Critic Reviews for The Indian Runner

Audience Reviews for The Indian Runner