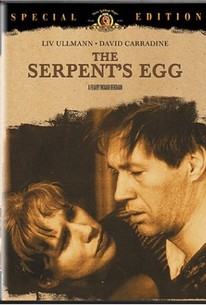 The Serpent's Egg, or Das Schlangenei is director Ingmar Bergman's second English language production (The Touch was his first). It is, however, his first completely non-Swedish production, made after his voluntary self-exile from Sweden over taxation issues. Set in Berlin in the early 1920s, it explores the fear and despair the city evokes in Manuela and Abel Rosenberg (Liv Ullmann and David Carradine), two Jewish trapeze artists. The suicide of Manuela's husband (Abel's brother), has stranded them in Berlin. Berlin is shown to already possess the sinister elements of cruelty and anti-Semitism which laid the groundwork for the later Nazi takeover. A series of misadventures gets them sent to a medical clinic for treatment. However, the clinic is actually a site for Nazi-type "racial" experiments on humans, which generally either madden or kill the subjects. Das Schlangenei was savaged by the critics for its improbable-seeming story and more particularly, for casting David Carradine (best known for his earlier appearances in the Kung Fu U.S. television series) in a crucial role.

James Whitmore
as The Priest

Gaby Dohm
as Woman with baby

Ralf Wolter
as Partner of the master of ceremonies

Renate Grosser
as Prostitute
View All

Critic Reviews for The Serpent's Egg

Audience Reviews for The Serpent's Egg