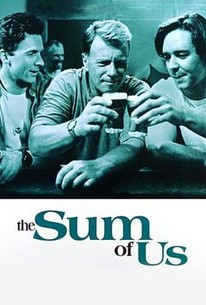 The Sum of Us

The Sum of Us Ratings & Reviews Explanation

The Sum of Us Photos

Harry (Jack Thompson), a middle-aged father who suffered through the death of his wife, is ready to get back into dating. Harry shares a home with his gay son, Jeff (Russell Crowe), who is also looking for a serious relationship. Harry and Jeff, who are very close, decide to help each another look for potential partners. Jeff finds a boyfriend who is still in the closet, and Harry begins dating Joyce (Deborah Kennedy). She has a bias against gays, which puts Harry in a tough spot.

Elaine Lee
as Woman on Train

Critic Reviews for The Sum of Us

Audience Reviews for The Sum of Us

There are no featured audience reviews for The Sum of Us at this time.

The Sum of Us Quotes