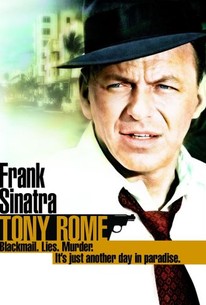 Frank Sinatra brings a sneering Rat Pack ethos to his first hard-boiled detective role in Tony Rome. Tony is an ex-cop who lives on a houseboat off Miami, accepting fees for private-eye work. His former partner, Ralph Turpin (Robert J. Wilke), asks Tony for help in locating Diana Pines (Sue Lyon), the daughter of rich construction magnate Rudolph Kosterman (Simon Oakland). Tony finds her unconscious and drunk in a sleazy motel room and returns her to her home. Rudolph decides to hire Tony in order to find out why his daughter is behaving so erratically. In the meantime, Diana's stepmother, Rita (Gena Rowlands), also offers Tony money to inform her first about whatever Tony finds out. He discovers that Diana has lost an expensive diamond pin, but before he can act upon the information, he is beaten up by two goons and nearly killed by Diana's crazy step-uncle. Tony then finds out that Turpin has been murdered. With help from sultry and sexy divorcée Ann Archer (Jill St. John), Tony discovers that Diana has been funneling large sums of money to her alcoholic mother, Lorna (Jeanne Cooper), with Rita's priceless jewelry being replaced by fakes. A collection of disagreeable human sludge all take their turns trying to get Tony and the information that he holds -- including his old pal Lieutenant Santini (Richard Conte). After a murder attempt on Rudolph's life, Tony uncovers a series of vile connections involving blackmail, deceit, and betrayal. ~ Paul Brenner, Rovi

There are no featured audience reviews for Tony Rome at this time.