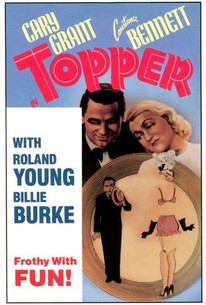 By 1937, producer Hal Roach was hoping to wean himself away from the Laurel & Hardy-Our Gang slapstick on which he had built his studio's reputation by delving into the "screwball comedy" genre. Roach selected the racy Thorne Smith fantasy novel Topper for adaptation, and the result was one of the most endearingly funny films of the decade. Constance Bennett and Cary Grant play Marion and George Kerby, a wealthy, freewheeling young married couple whose uninhibited lifestyle is the talk of the town. After a particularly bibulous evening on the town, the Kerbys race homeward in their gleaming new roadster. George fails to negotiate a curve, and the car plows into a tree, killing both its occupants. Seconds later, the ghosts of George and Marion emerge from the wreckage, behaving as frivolously as if nothing had happened. Upon realizing that they're dead, the Kerbys also realize that they haven't been immediately snatched up into Heaven. Determining that they're required to perform one good deed before being allowed past the Pearly Gates, George and Marion set about to "liberate" stuffy, sedate, henpecked banker Cosmo Topper (Roland Young). At first resistant to the charms of his invisible benefactors, Topper begins to loosen up and truly enjoy life for the first time. Naturally, this doesn't sit well with Topper's supercilious wife (Billie Burke) nor his long-suffering butler (Alan Mobray), especially during a climactic free-for-all at a vacation resort. Though special effects abound in Topper, most of the humor derives from the embarrassed reactions of Roland Young as he tries to fend off the flirtatious advances of the ghostly Marion and the benignly strongman tactics of the spectral George. Adding to the fun are Eugene Pallette as a flustered house detective and Arthur Lake as a pratfalling bellboy. The musical score by longtime Hal Roach composer Marvin Hatley is perfectly attuned to the zany goings-on (including snatches of background music from Roach's earlier Laurel and Hardy comedies), while Hoagy Carmichael appears briefly on screen to introduce the film's signature tune, "Old Man Moon." Topper proved successful enough to warrant two sequels, as well as a popular TV series of the early 1950s.

Three Hits and a Miss
as Themselves

Get Ready for Step Up 3-D
View All