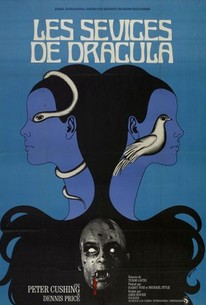 This entry in Hammer Films' long-running vampire series of the '60s and '70s is one of the most evocative and original. The story features voluptuous twin Playboy centerfolds Madeleine and Mary Collinson as sisters who, without parents, are sent to stay with their oppressive uncle (Peter Cushing, looking more emaciated than ever), who happens to live near the sinister Karnstein Castle, the locale of countless vampiric happenings in two prequels (The Vampire Lovers and Lust for a Vampire). One of the twins wanders over and meets the dashing Count Karstein (Damien Thomas), a vampire who later uses the girl's blood to awaken his long-lost ancestor from the dead. Of course, the uncle predictably gives chase once trouble starts, but there is a clever plot twist as the count switches the twins before one is about to be burned at the stake for her supposed satanic involvements. Twins of Evil unabashedly exploits the twins' assets to pump up the film's sex appeal; it also seems to cater to viewers with a vampire fetish. Still, neither is necessarily a bad thing in a vampire film; Twins of Evil does create an effectively sensuous mood while also managing to sustain a fair amount of tension throughout the picture. Although Universal Pictures, the U.S. distributor, extracted nearly all of the flesh and bloodletting from its release, the original British cut retains everything and is the usual copy found on video. Like its predecessors, the script for Twins of Evil is loosely based on LeFanu's classic vampire story Carmilla. ~ Jeremy Beday, Rovi

Shelagh Wilcox
as Lady in Coach
View All

Critic Reviews for Twins of Evil

Audience Reviews for Twins of Evil