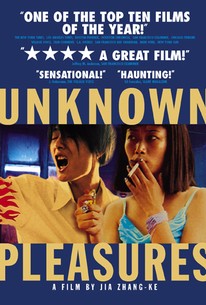 Unknown Pleasures tests the patience with a look at modern China that can feel as aimless as its characters' lives, but gathers real resonance as it goes along.

Unknown Pleasures takes place in China, in the small city of Datong, in 2001, where disaffected teenagers look for any kind of excitement to enliven their dreary existence. Bin Bin (Zhao Wei Wei) dates a quiet student, Yuan Yuan (Zhou Qing Feng) who's thinking of going to university in Beijing. They spend their time together holding hands, watching karaoke and Monkey King videos, and despairing for the future. Bin Bin envies the Monkey King his freedom. Bin Bin has quit his job at a local market, but he doesn't tell his mother (Bai Ru). When she finds out, she wants him to join the army. His less circumspect friend, Xiao Ji (Wu Qiong), stalks a flashy performer, Qiao Qiao (Zhao Tao), who promotes Mongolian King liquor and dates a gangster. The gangster doesn't appreciate Xiao Ji's attentions and slaps him around. Qiao Qiao seems to like him, but as free-spirited as she seems, she's afraid to defy her violent boyfriend. Bin Bin tries selling bootleg DVDs on the street to earn a living. One of his customers, a thug named Xiao Wu (Wang Hong Wei) complains that Bin Bin doesn't carry underground titles like Pickpocket and Platform (writer-director Jia Zhang Ke's previous features), but is pleased to find Pulp Fiction. Inspired by the latter film's opening, Bin Bin and Xiao Ji plot an ill-fated bank robbery. Unknown Pleasures showed in competition at the 2002 Cannes Film Festival and was also selected for the 2002 New York Film Festival.

Liu Xi An
as Xiao ji's Father
View All