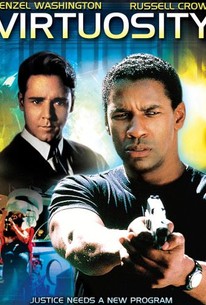 Woefully deficient in thrills or common sense, Virtuosity strands its talented stars in a story whose vision of the future is depressingly short on imagination.

In a futuristic, high-tech world run by huge corporations, Parker Barnes (Denzel Washington) is an L.A. policeman serving time for killing the psychotic who murdered his wife and child. Lindenmeyer (Stephen Spinella), a Dr. Frankenstein of the computer era, has created a monster, Sid 6.7 (Russell Crowe), a virtual reality entity which is programmed with the character traits of scores of mass murderers. Sid 6.7 has escaped the control of its creator and is now running amok. The privatized police force in charge of keeping the peace in the city is run by Elizabeth Deane (Louise Fletcher). Barnes has volunteered to test a new criminal tracking system based on a virtual reality device. His job is to find Sid 6.7, with the help of psychologist Madison Carter (Kelly Lynch). Barnes gets out of prison and reinstated to the police force to pursue his dangerous prey.

Monica Allison
as Woman on Train

Juan A. Riojas
as Metromedia Cop

Una Damon
as Woman with Video Camera
View All

TORONTO: "The Fountain" Is Untidy But Fascinating
Denzel, Crowe, and Sir Ridley go "Gangster"
View All