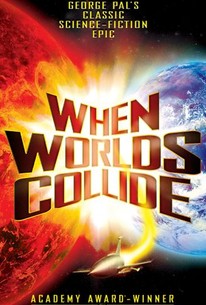 First published in 1932, Philip Wylie and Edwin Balmer's speculative novel When Worlds Collide was immediately purchased by Paramount as a possible project for director Cecil B. DeMille. But because none of Paramount's scriptwriters were able to come up with an adequate screen treatment, the property lay on the shelf until 1950, when producer George Pal was casting about for a follow-up to his successful sci-fier Destination Moon. Though the film was top-heavy with special effects, Pal was able to bring When Worlds Collide in for under a million dollars, thanks to an inexpensive cast and a heavy reliance upon stock footage. The story is set in motion when Dr. Cole Henderson (Larry Keating) announces that a extraterrestrial planet is on a collision course with the Earth. No one believes Henderson's story, save for crippled financier Stanton (John Hoyt), who finances the construction of a gigantic spaceship, built for the purpose of transporting selected survivors from the doomed Earth to another Earthlike planet. As it becomes obvious that Henderson's predictions will come true, a worldwide lottery is held to select those people who will be rescued from oblivion by Stanton's spaceship. In the climactic scenes, the worlds do indeed collide, with appropriately spectacular results. But will the spaceship, overloaded with humanity, be able to take off and seek out a Brave New World? Amidst the thrills, a romantic triangle emerges, involving Richard Derr, Barbara Rush and Peter Hanson. ~ Hal Erickson, Rovi

James Seay
as Reporter at Airport

News & Interviews for When Worlds Collide

Critic Reviews for When Worlds Collide

Audience Reviews for When Worlds Collide