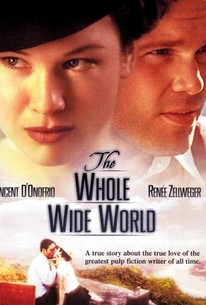 A touching and unusual love story, The Whole Wide World was based on a memoir by Novalyne Price Ellis, in which she recalled her brief romance with Robert E. Howard, creator of Conan the Barbarian and one of the finest and most prolific pulp writers of his day. In 1933, Novalyne Price (Renee Zellweger) is a pretty but shy Texas schoolteacher who would like to be a writer some day. A friend offers to introduce her to Howard (Vincent D'Onofrio), who writes broad, bold yarns about superhuman heroes and damsels in distress and has little patience for writers of more pretentious fiction. Novalyne likes Howard and he seems to like her, but she finds him a hard man to deal with. He lives in the world of his stories, and he devotes as much time as possible to his bedridden mother, which leaves him little time to pursue a romance. But when Howard discovers that another man has been courting Novalyne, he's heartbroken -- even if they didn't have a conventional romance, he felt there was a special emotional bond between them, and he hates to see it thrown away. Renee Zellweger and Vincent D'Onofrio both deliver fine performances and are a believable (if unconventional) romantic couple; D'Onofrio also co-produced.

Marion Eaton
as Woman on Bus

Stephen Marshall
as Director
View All