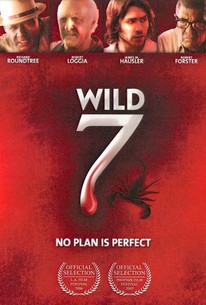 Two sets of crooks -- one of beginners, the other old hands at the game -- are lured by the promise of the big heist in a comedy drama from writer and director James Hausler. Wilson (Robert Forster) has just been released from prison after serving 25 years for armed robbery. While Wilson is edging into retirement age, he still has an old score to settle with Mackey (Robert Loggia), a career criminal who helped put Wilson behind bars. Wilson teams up with Marvin (Richard Roundtree), a fellow ex-con who also has a beef against Mackey, and together they set up a heist in order to hit their rival where it hurts. Meanwhile, Buckley (James Hausler) is a slacker who thinks a life of crime might be easier than holding down a real job. With the help of his pals, Buckley maps out a robbery that should earn him a sizable payday, though it doesn't take long for his inexperience to become an issue. Also featuring Lucie Arnaz and Christopher Clark, Wild Seven received its world premiere at the 2006 Los Angeles Film Festival.

There are no critic reviews yet for Wild 7. Keep checking Rotten Tomatoes for updates!

There are no featured audience reviews for Wild 7 at this time.