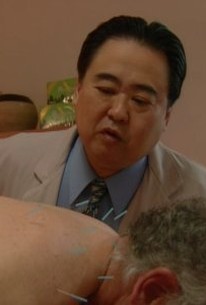 The Acupuncturist
Curb Your Enthusiasm Season 2

A confident acupuncturist (Klone Young) is treating Larry (Larry David) for his chronic neck pain, when Larry makes a deal with him. If the acupuncturist cures Larry, he'll give him five thousand dollars. If Larry doesn't get better, he won't give the acupuncturist anything. At the supermarket that afternoon, Larry runs into Barry Weiner (Jeremy Kramer) who was a writer at Saturday Night Live when Larry was there. Now Barry is working at the meat counter. He explains that he couldn't write for TV anymore. He also mentions that his wealthy father Ed Asner has heart problems, and will probably die soon, but doesn't want to give him any of his money while he's still alive. Barry borrows five thousand dollars from Larry, and promises to pay him back as soon as his father dies. Later, at home, Larry and Cheryl (Cheryl Hines) are surprised to get a flower delivery. It turns out to be orchids for Larry from the acupuncturist. At a Japanese restaurant with Jeff (Jeff Garlin, they discuss Barry's bad fortune, and Larry tells Jeff, "There but for the grace of God go...you." Jeff tells Larry that the acupuncturist is probably gay and Larry decides not to see him anymore. When he asks the waiter (Koji Kataoka) if the orchids are some Japanese custom, the waiter gets very angry, and he doesn't seem any friendlier when Larry accidentally sets his arm on fire and puts out the fire by drenching his arm with water. Later, Larry, Cheryl, and Jeff attend a surprise party for Barry's wife (Rita Rudnick), where Barry's father takes a shine to Cheryl, and Larry decides to "help" Barry with his problem. 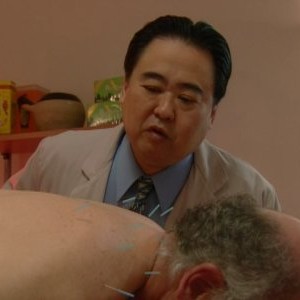