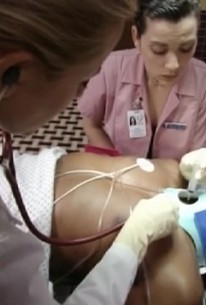 This first episode of ER's fourth season originally aired live on September 25, 1997, with two separate telecasts for the East and West Coasts. A TV documentary crew follows Dr. Mark Greene (Anthony Edwards) during a "typical" shift in the emergency room of Chicago's County General Hospital. Still not completely recovered from a brutal beating, Greene is none too happy about being a "TV star," sentiments shared by the ER's attending physician Kerry Weaver (Laura Innes), who regards the camera crew as an invasion of everyone's privacy. As it turns out, the documentary makers get more than they bargained for as they record for posterity a gang fight, an out-of-control patient, and a heart attack. In the midst of all this confusion, Dr. Elizabeth Corday (Alex Kingston) arrives from England to witness American surgical procedures. The syndicated version of "Ambush" combines scenes from both the East and West Coast broadcasts, expunging a number of conspicuous continuity errors and an embarrassing moment in which a crucial prop is misplaced. 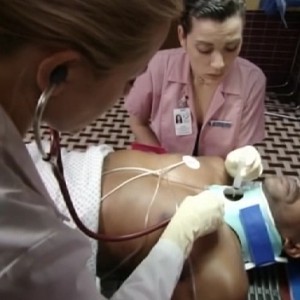