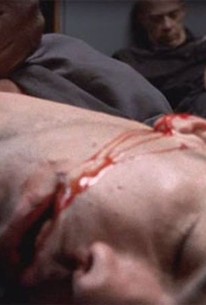 Even the Score
Oz Season 4

Guerra (Otto Sanchez) is mad at White (Michael Wright), who stabbed him, so he goes to McManus (Terry Kinney) and lets him know White is still using. After a shakedown proves it, McManus confronts White, but decides to let him stay in Em City if he goes to rehab. White gets into a fight during Sister Pete's (Rita Moreno) session, but McManus won't give up on him. Hughes (Seth Gilliam) tells Glynn (Ernie Hudson) he wants his "manifesto" published on the day of his execution. Glynn tears up the document. Robson (R.E. Rodgers) gets out of solitary, and Said (Eamon Walker) is seething with rage. When Robson and Schillinger (J.K. Simmons) taunt Said, he explodes, beating Robson bloody. Schillinger asks Carrie (Jenna Lamia) directly if her baby is Hank's -- and she's not certain. McManus invites a scout from the Sacramento Kings to see Officer Brass (Blake Robbins) play their second game against Vayhue (Rick Fox) and Busmalis (Tom Mardirosian). A resentful guard smashes Vayhue's knee, and the convicts lose the second game. Brass is invited to try out for the Kings, but Morales (David Zayas) arranges for him to be taken out of commission. Galson (John Doman) finds out that Tug Daniels (Method Man) is working with Supreme Allah (Lord Jamar), and tells Redding (Anthony Chisholm), who punishes Daniels. Giles' (Austin Pendleton) choice of execution method saves his life, and brings the state's death penalty laws into question. O'Reily (Dean Winters) gets another inmate to take care of Howell (Kristin Rohde). Cloutier (Luke Perry), appalled by his violent behavior, casts Kirk (Sean Dugan) out of his flock. Dr. Nathan (Lauren Velez) refuses to help O'Reilly (Dean Winters) escape. He has an emotional meeting with his mother (Betty Buckley), and later agrees to help Connelly (Brian F. O'Byrne) with an audacious plot.

Even the Score Photos 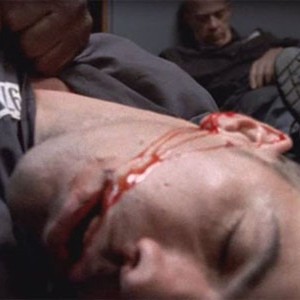