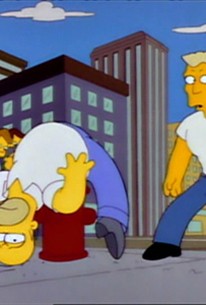 Brother from the Same Planet
The Simpsons Season 4

Homer Simpson (voice of Dan Castellaneta) promises his son, Bart (voice of Nancy Cartwright), that he'll remember to pick him up after soccer practice, but as is so often the case with Homer, despite his best intentions, he forgets, and Bart is left to walk home in the rain. Convinced that he deserves a better dad, Bart sees a TV commercial for Bigger Brothers, an organization that matches up strong and positive male role models with boys who need them. After fudging on a few facts on his Bigger Brother application, Bart has a new friend in Tom (voice of Phil Hartman), a friendly and appallingly noble Air Force pilot. Homer is hurt when he finds out about Bart's Bigger Brother, but figures two can play at that game; he becomes a Bigger Brother himself and begins spending time with Pepi (voice of Tress MacNeille), an immigrant boy from an unnamed country who hangs on Homer's every word, no matter how ridiculous. When Homer and Tom both end up taking their charges to the Springfield Aquarium, it leads to a showdown between the twin father figures. Meanwhile, Lisa (voice of Yeardley Smith) has developed a crush on a teen star named Corey, and begins calling a 900-hotline number for the latest scoop on her fave rave. But after racking up a massive phone bill, Marge (voice of Julie Kavner) decides she has to break her daughter's Corey habit once and for all. "Brother From the Same Planet" first aired on February 4, 1993.

Brother from the Same Planet Photos 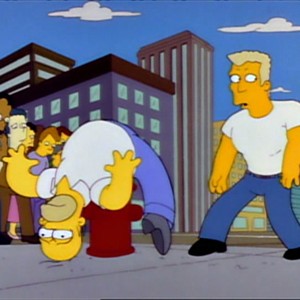