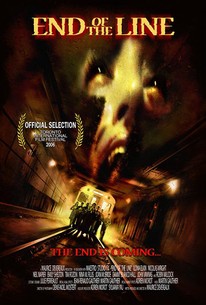 End of the Line

End of the Line Photos

A ride on the subway takes a woman to an unexpected and very dangerous place in this independent horror thriller from Canadian filmmaker Maurice Devereaux. Karen (Ilona Elkin) works as a nurse at a psychiatric hospital and has had a very trying day dealing with new patients, made all the more stressful by the news that a close friend and former patient has killed herself. Wanting nothing more than a quiet evening at home, Karen is waiting on a subway platform when she's approached by a religious zealot who wishes to talk to her. She isn't interested, but the stranger soon gets her attention when he demonstrates that the cross around his neck hides a switchblade. Mike (Nicolas Wright), another commuter waiting for his ride home, comes to Karen's rescue and they board the train together. However, before they can reach their stops, a power failure brings the subway to a halt and Karen and Mike find they're trapped with a handful of fanatics belonging to the same sect; they are convinced the Apocalypse is on the way, and before the Rapture can take place, they must sacrifice the non-believers, which means Karen and Mike must fight for their lives. End of the Line received its world premiere at the 2006 Toronto Film Festival. ~ Mark Deming, Rovi

Critic Reviews for End of the Line

Audience Reviews for End of the Line

End of the Line Quotes