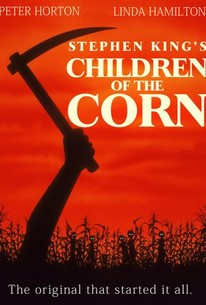 Children of the Corn

Children of the Corn's strong premise and beginning gets shucked away for a kiddie thriller that runs in circles.

Narrator Job (Robby Kiger) relates the tale of Gatlin, NE, where one day the children, led by a boy preacher named Isaac (John Franklin), rose up and slaughtered all the grown-ups. A few years later, Job and his sister, Sarah (Ammemarie McEvoy), help their friend, Joseph (Jonas Marlowe), try to escape through the cornfields of Gatlin. Meanwhile, Burt Stanton (Peter Horton), a commitment-phobic young doctor, and Vicky Baxter (Linda Hamilton), his frustrated girlfriend, travel through the cornfield-lined roads of Nebraska on their way to Burt's new internship in Omaha. Their car hits Joseph, who appears out of nowhere, but upon examining him, Burt realizes the child's throat was slit before he ever wandered out from the corn. Attempting to locate help, Burt and Vicky turn to gas-station owner Diehl (R.G. Armstrong), who urges the couple to go anywhere but nearby Gatlin to report the murder. Several contradictory street signs later, they arrive in Gatlin anyway, and, befriending Sarah and Joseph, attempt to uncover the mystery behind Isaac's cult and its mysterious deity, known only as He Who Walks Behind the Rows. Stephen King cash-ins flooded the market between the successes of Brian DePalma's Carrie (1976) and Rob Reiner's Misery (1990), many of them, like Children of the Corn, based only loosely on the author's fiction. The original short story appeared in the collection Night Shift.

Critic Reviews for Children of the Corn

Audience Reviews for Children of the Corn

Children of the Corn Quotes