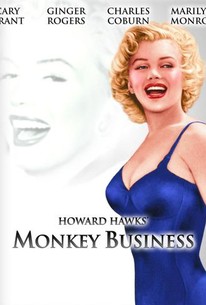 Howard Hawks hoped to capture the screwball comic fervor of his 1938 film Bringing Up Baby with his 1952 comedy Monkey Business. As in the earlier film, Cary Grant stars as an absent-minded professor involved in a research project. This time he's a chemist seeking a "fountain of youth" formula that will revitalize middle-agers both mentally and physically. Though Grant's own laboratory experiments yield little fruit, a lab monkey, let loose from its cage, mixes a few random chemicals and comes up with just the formula Grant is looking for. This mixture is inadvertently dumped in the lab's water supply; the fun begins when staid, uptight Grant drinks some of the "bitter" water, then begins cutting up like a teenager. A harmless afternoon on the town with luscious secretary Marilyn Monroe rouses the ire of Grant's wife Ginger Rogers, but her behavior is even more infantile when she falls under the spell of the youth formula. Everyone remembers the best line in Monkey Business: foxy-grandpa research supervisor Charles Coburn hands the curvacious Monroe a letter and says "Get someone to type this". Even better is his next line: after Monroe sashays out of the room, Coburn turns to Grant and, with eyes atwinkle, murmurs "Anyone can type." Likewise amusing is Monkey Business's pre-credits gag, wherein Cary Grant opens a door and is about to step forward when director Hawks, off-camera, admonishes "Not yet, Cary." Among the co-conspirators on Monkey Business's carefree script are Ben Hecht, Charles Lederer and I.A.L. Diamond, with an original story by Harry Segall (Here Comes Mr. Jordan) as their source. ~ Hal Erickson, Rovi