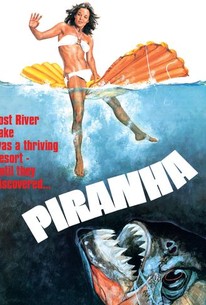 Performed with a wink and directed with wry self-awareness, Piranha is an unabashed B-movie with satirical bite.

The sophomore effort for director Joe Dante, a future protégé of Steven Spielberg, this low-budget, high-camp horror spoof of Jaws (1977) features several chiller stars of yesteryear. Insurance investigator Maggie McKeown (Heather Menzies) is dispatched to find two missing teenage hikers near Lost River Lake. She hires surly backwoods drunkard Paul Grogan (Bradford Dillman) to serve as her guide. Searching the area, they find an abandoned military facility. The only resident is Dr. Robert Hoak (Kevin McCarthy), former head of a top-secret project to breed piranha for use in the Vietnam War. The project was closed down years ago, but Hoak has continued raising a deadly strain of the flesh-eating fish. When Hoak is knocked unconscious, Maggie and Paul accidentally release the piranha into a local river, which leads to the lake where a children's summer camp and a newly opened tourist resort will provide plenty of fish food for the hungry predators. Maggie and Paul race to warn the locals, but their pleas fall on skeptical ears, such as those of resort owner Buck Gardner (Dick Miller) -- until the piranha reach the swimmers. Piranha (1978) was co-written by John Sayles, making his motion picture debut. ~ Karl Williams, Rovi

Jack Pauleson
as In Canoe

Eric Henshaw
as Father in Canoe

Bruce Barbour
as Man in Boat