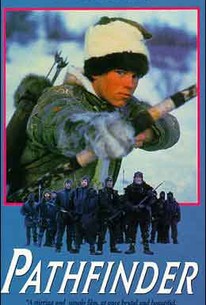 Norwegian director Nils Gaup used the landscape of Finland as his backdrop in Pathfinder. The story is set in 10th-century Lapland. Teen-aged Mikkel Gaup, after watching his family being slaughtered by the bloodthirsty Tchude tribe, takes refuge in a small, peaceful village. He tries to warn the residents of the cruelties of the Tchudes; as a result, half the villagers take to the hills, while the other half elect to stay and stand their ground. The Tchudes make short work of the villagers, then take Gaup prisoner. He pretends to agree to lead the Tchudes towards the other villagers, but is able to turn the tables before it's too late. Inspired by an ancient legend, Pathfinder is filmed in near-documentary fashion, bringing the past so vividly alive that the audience is tempted to look over its shoulder to see if Tchudes are poised to attack in the lobby of the theatre. Though nominated for a best foreign picture Oscar in 1987, the film was not given a general US release until 1990. ~ Hal Erickson, Rovi

Nils Utsi
as Raste the Noaidi

Helgi Skúlason
as Tchude with Scar

Sara Maria Gaup
as Save

Inger Utsi
as Sister
View All

There are no featured audience reviews for Ofelas (Pathfinder) at this time.