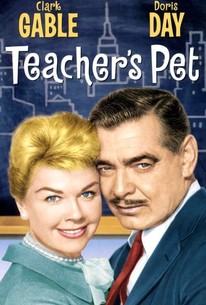 Hard-boiled, self-educated newspaper editor Clark Gable turns down an opportunity to lecture before a night-school journalism class, publicly ridiculing the notion that the art of news writing can be taught. After receiving an honorary university degree, Gable's publisher orders the recalcitrant editor to appear at the lecture. Upon entering the classroom, Gable overhears journalism teacher Doris Day, the daughter of a Pulitzer Prize-winning reporter, condemn Gable's attitude towards higher education. Intrigued by the lovely Day, Gable enrolls in her class under an assumed name. He quickly goes to the head of the class (after all, he's had more experience than all the other students combined), then begins a campaign to romance Day. But there's a fly in the ointment: Day's fiance Gig Young, who gives an Oscar-calibre performance as a smug know-all. Likewise stealing every scene she's in is Mamie Van Doren, playing an exotic dancer who's set her sights on Gable. Fay and Michael Kanin's sprightly screenplay for Teacher's Pet manages to steer clear of any and all potential cliches.

Sidney Skolsky
as Himself

Vernon Scott
as Himself

Joe Hyams
as Himself

Erskine Johnson
as Himself

Frank P. Quinn
as Himself
View All