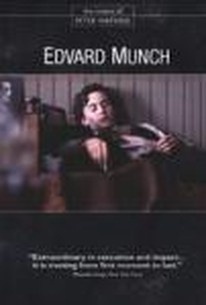 The troubled life and career of one of Norway's most celebrated artists is examined with documentary-style realism in this biography from celebrated filmmaker Peter Watkins. Edvard Munch (Geir Westby) was born in 1863 into a well-to-do and privileged family, but he had a unhappy upbringing; his mother and his younger sister died when he was at an impressionable age, and his father was cold, judgmental, emotionally distant, and unsupportive of his ambitions. As a young man, Munch fell in with the Scandinavian bohemian community and developed an appetite for alcohol, which further distanced him from his father. Munch also began an affair with a married woman he called Mrs. Heilberg (Gro Fraas), and his obsessive need for her had a seismic effect on his personality. Munch took up painting, but rather than follow the pattern of realism that was common at the time, Munch used unusual color schemes and distressed textures on his canvases to help convey the darker emotions he longed to express. Between his unusual techniques and pervasive themes of death, illness and eroticism, Munch's work was frequently lambasted by critics and gallery patrons alike, and he briefly exiled himself in Germany, where alongside Swedish playwright August Strindberg he struggled to find an appreciative audience for his challenging visions. Edvard Munch was filmed in the style of a documentary, with characters often addressing the camera as if being "interviewed" and hand-held cameras adding an informal and realistic tone. The film was produced for Norwegian television, but a shortened version was later prepared for international theatrical release. ~ Mark Deming, Rovi

Peter Watkins
as Narrator
View All