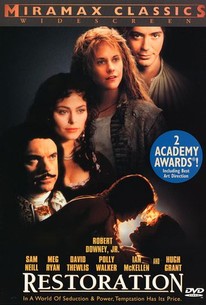 Restoration spins an engaging period yarn out of its bestselling source material, brought to life through the efforts of an eclectic ensemble cast led by Robert Downey Jr.

This lavish historical drama based on the acclaimed novel by Rose Tremain won Oscars for Costume Design and Art Direction. Robert Downey, Jr. stars as Robert Merivel, a gifted medical student of the 17th century who ignores his studies in favor of pursuing debauched fun -- much to the consternation of his high-minded Quaker colleague John Pearce (David Thewlis). Merivel achieves the high societal status he covets when he's summoned by King Charles II (Sam Neill). Merivel is chagrined to find that he's expected to care for the king's ailing spaniel, but the dog rallies and Merivel joins court. When one of Charles' mistresses, Celia (Polly Walker) becomes uppity, Charles arranges her marriage to Merivel. In return for keeping Celia in a pretend marriage, he receives an estate and knighthood. Merivel, however, falls in love with Celia and, betrayed by an eccentric painter (Hugh Grant), inspires the king's wrath. Banished and stripped of his wealth, Merivel rediscovers love with an Irish mental patient (Meg Ryan). He also rediscovers his passion for medicine during London's Great Fire and the Black Plague.

Ian McKellen
as Will Gates

John Quarmby
as The Chancellor

John Dallimore
as The Secretary