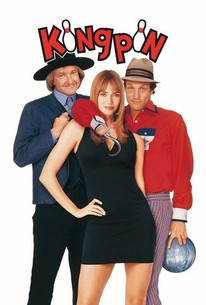 Kingpin has its moments, but they're often offset by an eagerness to descend into vulgar mean-spiritedness.

In the '70s, Roy Munsen (Woody Harrelson) was a bowling phenomenon. He was none too sharp about picking friends, though, and the champion he had to beat, "Big Ern," takes him under his supposedly friendly wing. Big Ern (Bill Murray) shows him the high-living lifestyle, and induces him to go on the road with him, hustling small-town bowlers. A couple of the men he bilks take exception to the scam, and show their displeasure with Roy by mangling his hand. Twenty years later, Roy (who now has a hook in place of his hand), earns his living as a salesman. On a visit to a bowling alley, he cannot help but notice the incredible talents of an Amish boy, Ishmael (Randy Quaid). Bowling is not part of the Amish lifestyle, but Ishmael occasionally sneaks into the bowling alley and plays a frame or two. Roy takes Ishmael under his wing, and together they begin a quest for bowling success. This comedy is directed by Peter and Robert Farrelly, who also directed Dumb and Dumber. Like those comedies, it contains a lot of gross-out jokes and bathroom humor.

Chris Elliott
as The Gambler

Richard Tyson
as Owner Of Stiffy's

Will Rothhaar
as Young Roy

Chris Berman
as Himself

Hillary Matthews
as Mother With Carriage

Ryan Heggs
as Baby in Carriage

William Heggs
as Baby in Carriage

The Artist Formerly Known As Docky
as Uncle Willy

Jon Dennis
as Himself

Chris Schenkel
as Himself