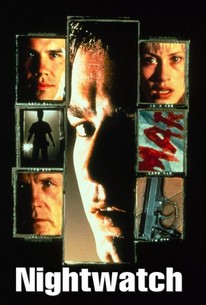 Nightwatch loses much of what made its inspiration entertaining - and proves that when remaking a foreign film, hiring the original director is no guarantee of success.

Like The Vanishing (1988 and 1993), Nightwatch is an English-language version of a foreign-made film with the original director hired to remake his own movie. Ole Bornedal was the writer-director of the suspenseful 1994 thriller, Nattevagten, which had no U.S. release immediately on the heels of its success in Denmark. For the second time around, Bornedal directed, but Steven Soderbergh wrote a new script based on Bornedal's original film. Both were produced by Michael Obel. Nattevagten was Bornedal's directorial debut, and reviews praised the film for the claustrophobic atmospherics and suspense generated from the very first establishing scene. For the 1998 English-language remake, the artistic elements of the original gave way to name actors, slicker production values, and the more conventional grindhouse genre approach, opening with a brutal prostitute murder in a pre-credit sequence. University student Martin (Ewan McGregor) ignores warnings to take a city-morgue night watchman job for extra cash. Odd happenings at the morgue are linked to a serial killer, and Inspector Thomas Cray (Nick Nolte) investigates. Soon Martin's girlfriend Katherine (Patricia Arquette) learns that Martin has become a key suspect. However, some might suspect Martin's edgy friend James (Josh Brolin). Brad Dourif fills the role of a doctor, and young Alix Koromzay portrays vulnerable teen hooker Joyce.

Michael Matthys
as Guy in Pub

Alison Gale
as Girlfriend of Guy in Pub

Lennie Loftin
as Man in Theater