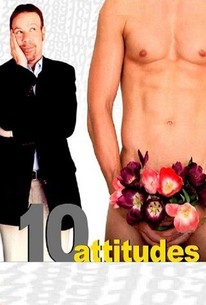 Can a caterer from Ohio find love in Los Angeles after spending a decade with the same man? Josh (Jason Stuart) is a thirtysomething gay man who came to Los Angeles from Cleveland ten years earlier with his significant other, Lyle (Rusty Updegraff). While Lyle has eased comfortably into the Los Angeles lifestyle, Josh is still a Midwesterner at heart, and he becomes aware of just how far off base he is when he learns Lyle has been having an affair. Josh breaks up with Lyle, and, suddenly single after a decade, he finds he's more than a little out of step with the Hollywood dating scene. Josh's friend Brandon (Christopher Cowen) assures him that it will only take ten dates for Josh to find the new man of his dreams, and after getting some fresh fashion advice from the wildly flamboyant Tex (Jim J. Bullock), Josh hits the Internet looking for love. However, Josh ends up kissing more than his share of toads as he searches for Prince Charming. 10 Attitudes marked the directorial debut of producer Michael Gallant; Gallant also co-wrote the film with leading man Jason Stuart.

Rusty Updegraff
as Lyle
View All

There are no featured audience reviews for 10 Attitudes at this time.