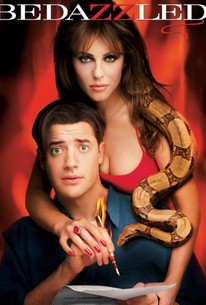 Though it has its funny moments, this remake is essentially a one-joke movie with too many flat spots.

How far will a man go to win the woman he loves? That's the devilish question behind this satirical romantic comedy. Elliot Richards (Brendan Fraser), a low-level white-collar worker, has fallen in love with his co-worker Allison (Frances O'Connor), who barely knows he exists. Desperate to win her love, sad sack Elliot is approached by the Devil (Elizabeth Hurley), who offers him seven wishes in exchange for his soul. Elliot accepts, but none of his wishes works out quite the way that he had hoped; after transforming himself into a South American tycoon, a champion NBA basketball player, a famous author, the most sensitive man in the world, and even the president of the United States, Elliot discovers that the Devil has added a crucial loophole each time, and for all his troubles, Allison still isn't interested in him. Directed by Harold Ramis, Bedazzled was adapted from the 1968 cult movie of the same name written by and starring Peter Cook and Dudley Moore. ~ Mark Deming, Rovi

Elizabeth Hurley
as The Devil

Stephan A. McKenzie
as DV8 Bouncer

Hope Wod
as Cheerleader
View All