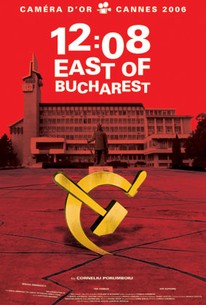 With a witty script full of satirical overtones and dry humor, 12:08 East of Bucharest is a thoroughly enjoyable Romanian comedy.

Gil-Scott Heron once wrote "the revolution will not be televised," but one Romanian newsman attempts to put his nation's revolution on the air after the fact in this satiric comedy from writer and director Corneliu Porumboiu. It's the sixteenth anniversary of the revolt that removed Communist dictator Nicolae Ceausescu from power in Romania, and Jderescu (Ion Sapdaru) is the host of a televised public affairs show who wants to do a special program on the revolution. Jderescu's idea is to bring on a handful of ordinary citizens to discuss their role in Ceausescu's overthrow and how their lives have changed since Communist rule was swept from Romania. However, Jderescu can only round up two guests for his broadcast -- elderly Piscoci (Mircea Andreescu), who's more interested in playing Santa Claus for the neighborhood kids than talking politics, and Manescu (Teo Corban), a schoolteacher nursing a brutal hangover. As Jderescu tries to lead a serious discussion of how Romania has changed since Ceausescu was driven from power, the conversation wanders off on a tangent about where the revolution actually took place, and the waters become even more muddied when Jderescu opens up the phone lines for questions from viewers, most of whom have their own distinct (and strongly conflicting) memories of the Revolution . . . and one of which has a bone to pick with Manescu over some drunken insults he hurled the night before. A Fost Sau n-a Fost? (aka 12:08 East of Bucharest) received its North American premier at the 2006 Toronto Film Festival. ~ Mark Deming, Rovi

Coca Bloos
as Voice of Tina

RT on DVD: 28 Weeks Later, Reign Over Me, and Surf’s Up!
Critical Consensus: "Ocean’s Thirteen" Is Slick And Fun; "Hostel" Is Worth A Visit: "Surf’s Up" Is Tubular
View All