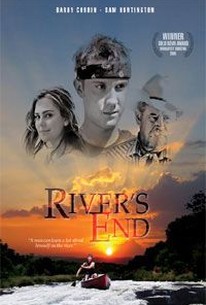 A concerned grandfather gives his troubled grandson one last shot at redemption in director William Katt's sensitive tale of survival in the wilderness. Clay Watkins (Sam Huntington) is a seventeen-year old boy who still hasn't gotten over the recent death of his father. His anger over the death sending him into a rapid downward spiral, Clay struggles to fit in at his new school after he is ejected from the basketball team and sought out by the police for his involvement in a petty crime. When wayward Clay's troubles begin to spell trouble for his concerned grandfather Buster (Barry Corbin), the local sheriff, the sympathetic lawman presents the reckless juvenile with an ultimatum: set out on a sixty-mile stretch of the Pecos River and prove your worth by navigating nature, or go to jail. While at first the choice seems like an obvious one, Clay soon finds his attempt to navigate the rugged Pecos River complicated by the appearance of two fugitives who are racing towards the Mexican border with a frightened hostage (Amanda Brooks) in tow.

Joe Stevens
as Eloy
View All

There are no critic reviews yet for River's End. Keep checking Rotten Tomatoes for updates!