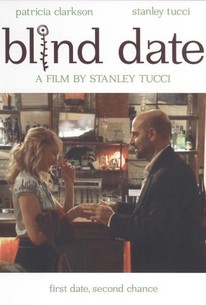 Despite the chemistry of stars Patricia Clarkson and Stanely Tucci, Blind Date's stagey direction and underdeveloped story make it feel more like a rehearsal than a performance.

A married couple deal with a crushing loss in a way that's both funny and deeply sad in this comedy-drama from director, screenwriter and star Stanley Tucci. Don (Tucci) and his wife Janna (Patricia Clarkson) meet every night in the same shabby nightclub where Don performs a humorously shambolic magic act. Don and Janna's relationship has been on the verge of collapse since the death of their daughter, and they're trying to reconnect with each other through role playing, so each evening they pretend they're meeting for the first time on a blind date after discovering one another through personal ads. Sometimes they assume characters that are openly confrontational, while other times they try to bring a sweetness and intimacy back into their lives, but more often than not their struggle to reclaim the love they knew ends in confusion and frustration. Blind Date was adapted by Tucci and screenwriter David Schechter from Theo Van Gogh's 1996 film of the same name; it was the second in a series of remakes of Van Gogh's films (following Steve Buscemi's Interview) created in response to Van Gogh's assassination by political extremists in 2004.

Patricia Clarkson
as Janna
View All

Critics Consensus: Surrogates Is A Passable Thriller
View All