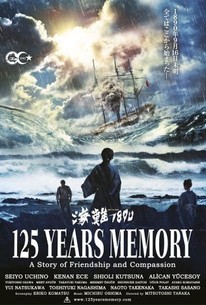 In 1890, Dr. Motosada Tamura (Seiyo Uchino)'s kindness in caring for his patients is winning him the trust of Kashino, a poor village on Kushimoto's Kii Oshima island in Wakayama prefecture. Assisting him is Haru (Shioli Kutsuna), who the shock of losing her fiancé to drowning has left mute. In the night of 16 September of that year the Turkish frigate Ertugrul, on its way home after paying a courtesy visit to the Emperor of Japan, is driven aground in a typhoon and wrecked in the Pacific Ocean off Cape Kashino. Hearing the alarm bell that warns of a vessel in distress, the villagers rush to the shore, to be confronted there with the grisly spectacle of vast numbers of dead and dying. With more than 500 crew members dead, it is the largest sea accident in history at that time. Risking their own lives, the villagers rescue who they can, while Tamura and Haru go to work treating the injured. The next morning, there are 69 survivors. In the wake of her life rescuing efforts Haru builds a special bond with Mustafa (Kenan Ece), 2nd engineering officer on the Ertugrul. Although being very poor and having hardly to eat, the locals share what little they have with strangers from a country 9,000 kilometers away. In the following weeks donation campaigns for the Turkish crew and their families start all over Japan. Torajiro Yamada, a businessman and tea master from Gunma, delivers the collected donations to Turkey. Torajiro Yamada, who is later also known as Abdülhalil Pasha, is to lay the foundation of Japanese-Turkish relations.

There are no critic reviews yet for 125 Years Memory (Kainan 1890). Keep checking Rotten Tomatoes for updates!

There are no featured audience reviews for 125 Years Memory (Kainan 1890) at this time.