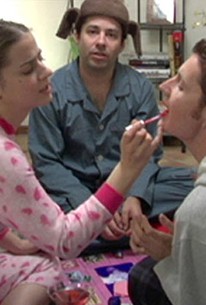 His thirtieth birthday rapidly approaching, a gay actor working as a tour guide at a movie studio theme park seeks to explore life outside the seductive allure of circuit parties in director Carrie Preston's soul searching independent comedy. James Sanchez is your typical late-twenties gay male; his hair is thinning, his gut is growing, and his dreams of fame and fortune have been replaced with bills that are piling up and a car that's about to break down. When he's not stalking the cute young boy at the local coffee house, tentatively exploring the world of online dating, or earning a little extra dough by wearing a giant bunny costume, James at least finds comfort in the company of his best friends Roxy and Brandon. While actress-turned-activist Roxy struggles to show James that there is more to life than dancing the night away at the club, self-assured homosexual Brandon is doing his best to coach his pal in the fine art of breaking the ice when he sees a man he's like to meet. A perpetual outsider who doesn't quite fit in to the circuit scene and finds himself constantly stuck in the middle of his Hispanic-American heritage, James does his best to find his place in the world with a little help from those who care about him most.

May Wheeler
as Giggly Girl 2

Jonathon Isaacs
as Xavier
View All

There are no critic reviews yet for 29th & Gay. Keep checking Rotten Tomatoes for updates!