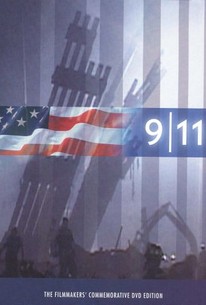 Telecast to coincide with the six-month "anniversary" of the horrific terrorist attack on New York's World Trade Center, the powerful and poignant two-hour CBS TV documentary 9/11 grew out of an independent film project inaugurated by French filmmakers Jules and Gedeon Naudet several months before the tragedy. Originally intending to produce an in-depth study of a "typical" American fireman, from the rookie training days to matriculation as a full-fledged firefighter, the brothers virtually lived in the headquarters of the F.D.N.Y.'s Engine Seven, Ladder One company. Thus it was that the Naudets were on hand to tape record the airliner "bombing" of both towers one and two on that fateful September 11 -- and even more dramatically, one of the brothers was able to record the hectic activities of the firefighters as they courageously went about their duties in the doomed lobby of tower one -- with only minutes to spare before both towers would collapse into a sickening mass of rubble. Although the more appalling examples of carnage are tactfully left unshown, such chilling vignettes as the offcamera sounds of crashing glass, indicating that another victim has jumped to his or her death from the uppermost heights of the twin towers, are left intact, obliging CBS to run a disclaimer in hopes of sparing the victims' loved ones any further anguish (too, the amount of understandable profanity spoken by the harried firefighters far exceeded anything ever heard before on mainstream American television). Telecast with only three commercial interruptions on March 10, 2002, 9/11 was dedicated to all the victims of the tragedy, with most of the proceeds going to the Uniformed Firefighter Association Scholarship Fund. The special garnered one of the highest ratings posted by CBS in years, with 38 million viewers tuning in.