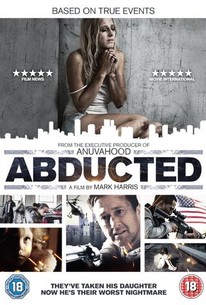 In an attempt to rebuild his marriage after the death of his son, Matt Hollis decides to take his wife and six year old daughter Lara on a trip of a lifetime to LA, to escape the constant reminders of their loss. Shortly after their arrival Matt's world is turned upside down when his wife is attacked in their holiday home, leaving her in a coma and their daughter LARA kidnapped by a child trafficking ring. Hunted by the police who mistakenly believe Matt has absconded with his daughter, he must evade capture and pursue the criminals responsible for Lara's abduction. Realizing he only has a 72-hour window of opportunity if he ever wants to see his daughter alive again, he enlists the help of Syan an old forces buddy, Matt tears a path of bloody vengeance through the streets of LA on a collision course with Lara's captors.

There are no critic reviews yet for Abducted. Keep checking Rotten Tomatoes for updates!

There are no featured reviews for Abducted at this time.