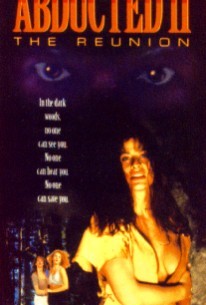 This confused sequel to Abducted (1986) features some gorgeous Vancouver wilderness scenery, lovingly photographed by Danny Nowak, in the service of an unappealing Deliverance variant. Vern (Lawrence King), the crazed wild man long presumed dead, abducts three female campers, taking one of them, Maria (Raquel Bianca), to his cave in the woods where he plans to impregnate her until he learns that she is not a virgin. Revolted, Vern makes Maria wear a horned buckskin mask, and she plays along, waiting to attack when the time is right. Dan Haggerty returns from the first film as Vern's father, who tracks down his son after fighting with a crazed hunter (Jan-Michael Vincent), only to be murdered. The cast is adequate, but Boon Collins' tepid adventure is hopelessly flawed. The long, superfluous scenes of Vincent and Haggerty gutting (real) rams and other wildlife while debating the merits of hunting will offend many viewers, and the script is muddled and unrealistic, with some of the most preposterous dialogue since the original. At its core, Abducted II: The Reunion is a rape-revenge movie with no rape, a moralistic diatribe with no morals, and a horror film with no horror. In other words, a complete waste of time.

There are no critic reviews yet for Abducted II: The Reunion. Keep checking Rotten Tomatoes for updates!

There are no featured audience reviews for Abducted II: The Reunion at this time.