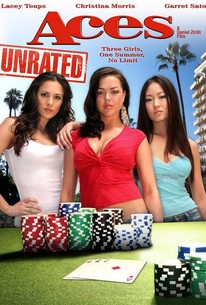 A sexy trio of alluring college card sharks brings the high-stakes world of professional poker to its knees in director Daniel Zirilli's tense tale of three girls who risked it all to make their wildest dreams come true. Elle (Christina Morris), Pieti (Sheena Chou), and Brooke (Lacey Toups) may not seem like your typical high rollers, but these college geniuses possess more than enough smarts to make up for what they lack in skill and luck. Texas Hold 'Em is their game, and these girls aren't above using their brains, their beauty, and some high-tech surveillance equipment to sweep the tables. After causing a sizable wave in the San Diego poker scene, Elle, Pieti, and Brooke set their sights on Las Vegas, and the gambler's paradise of Rio de Janeiro as well. With Elle's decoy skills, Brooke's mathematical wizardry, and Pieti's technological know-how, there's no table in the world that can't be cracked by this skilled but scheming trio.

Aaron Harvey
as Jock No. 1

Andy Freeman
as Jock No. 2

Tony Jackson
as Poker Player No. 1

Brandon Mallough
as Poker Player No. 2

Daniel Zirilli
as Danny the Shark
View All

There are no critic reviews yet for Aces. Keep checking Rotten Tomatoes for updates!