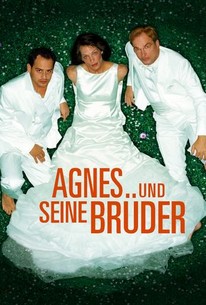 Agnes and His Brothers

Agnes and His Brothers Photos

The Tschirn brothers have their share of problems. Middle brother Hans-Jörg (Moritz Bleibtreu of Run Lola Run) is a librarian who neglects his duties in order to ogle every attractive woman that enters his workplace. His clumsy efforts to make conversation with them go nowhere. He takes his fetishistic peeping a step further, following women into the ladies room so he can sit in the next stall and pleasure himself while he spies on them. Older brother Werner (Herbert Knaup), a successful Green Party politico, would seem to be a bit more together, but his home life is in shambles. His wife, Signe (Katja Riemann of Rosenstrasse), no longer responds to his marital advances, and seems to have an unhealthily intimate relationship with their rebellious teenage son, Ralf (Tom Schilling), who spends much of his time trying to videotape his father's every embarrassment. Younger brother Martin has had a sex change and become Agnes (Martin Weiss). Agnes is a good-natured person, but profoundly unhappy, perhaps stemming from his unfulfilled relationship with an American fashion designer (played by Monster's Ball producer Lee Daniels in a cameo). But Hans-Jörg blames all of their problems on their father, Günther (Vadim Glowna), and can't even bring himself to visit the old man. Agnes and His Brothers, written and directed by Oskar Roehler, was selected by the Museum of Modern Art and the Film Society of Lincoln Center for inclusion in the 2005 edition of New Directors/New Films.

Critic Reviews for Agnes and His Brothers

Audience Reviews for Agnes and His Brothers

Agnes and His Brothers Quotes